This weekend, Myself, Andy and Steve coached our Pines to Peak weekend course, we were joined by  Alliance MTB Ambassador Rachel, her partner Stuart, Del, Steve and our Ambassador Lewis.

On Saturday we began the day by assessing what each of them wanted from the weekend, and after a quick briefing and checks we set to work.

All of the clients worked with us first of all on Body position, correcting their tendency to keep their weigh too far back and after tweaking their setup up and explaining some fundamental trail skills we moved to dial in their braking with some exercises and demonstrations. 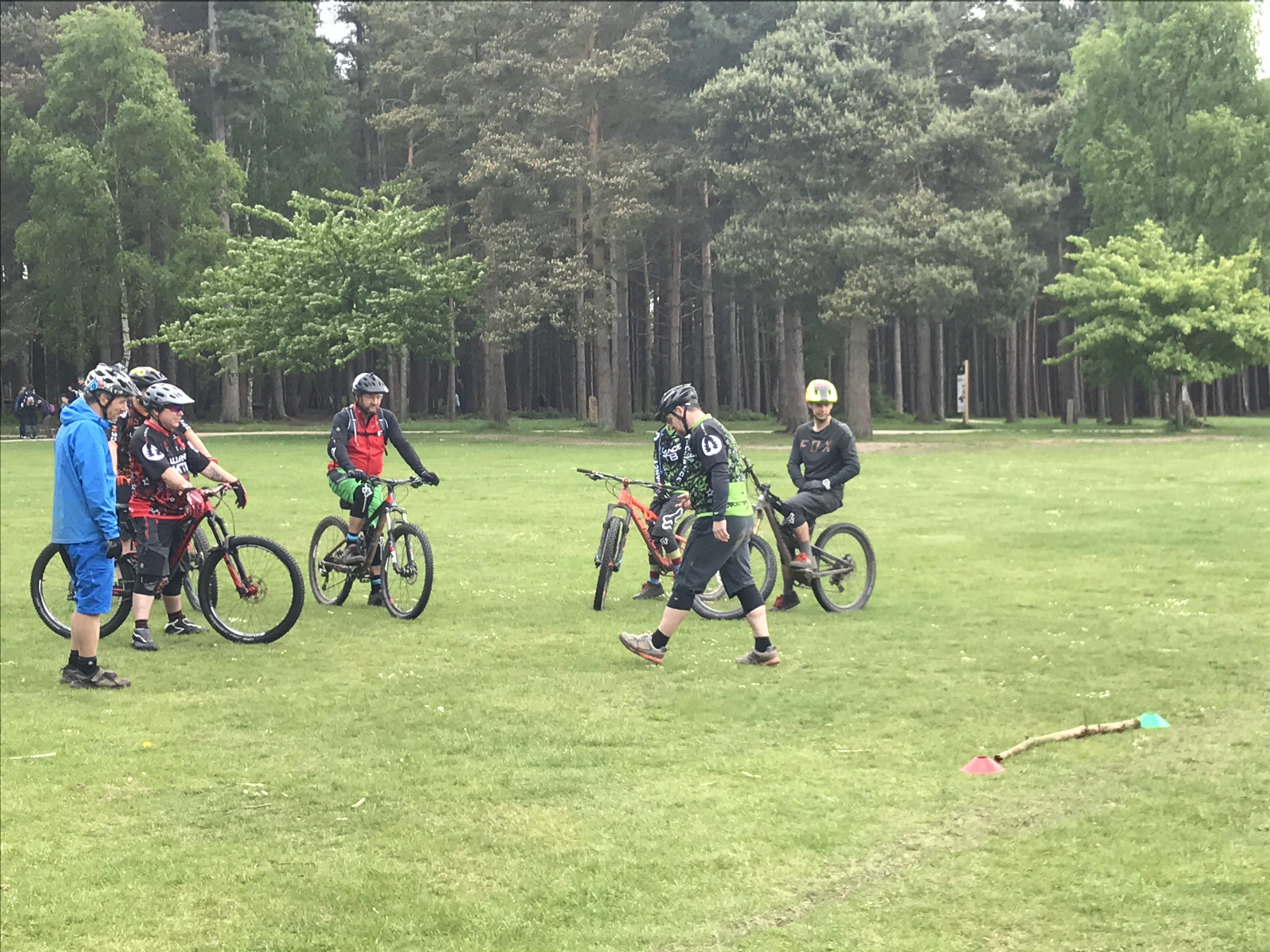 Knowing how they could relate to their bikes in terms of position and being able to stop effectively we then moved to cornering. Lewis, Del and Steve have all been to see us before, however each of them further refined their technique and flow through the corners.

For Rachel the greatest reset was her relationship with the front of the bike and opening her core and visual field by encouraging a positive and proactive “look”. Stuart just needed to push the bike further into the turn, with Rachel stating that having an explanation as to the reason why we lean the bike as being really useful for her confidence.

We moved to unweighting the bike and wrapped up for lunch and a coffee.

Straight out from lunch we headed onto the Red, sessoning sections and working on a specific skill from the morning session. Pumping the trail was broken into a challenge and we then spent a period of time feeding back along a section of corners, encouraging each rider to move their weight away from the back of the bike and to really use their looking, flow and weight into the bars to get confident grip. 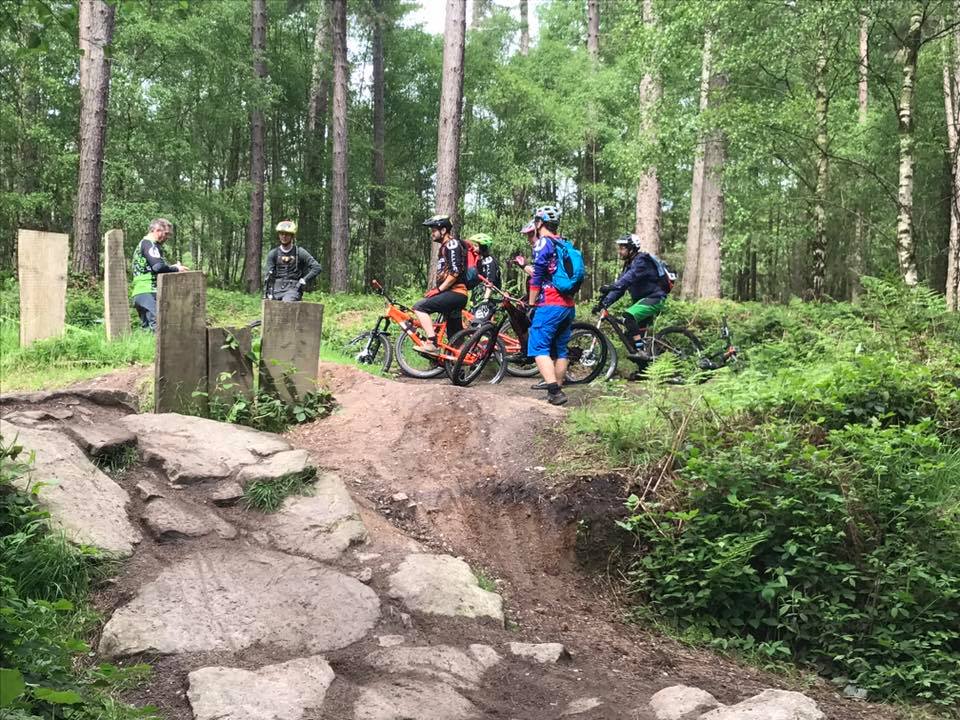 Onto the Rock Rollers and each rider pushed themselves to flow smoother and in some cases to jump the second half. Steve was much smoother than in previous coached sessions with Stu looking supremely confident.

We took in some off piste sections, pumping the trail and really moving well before having a look at a large rolling drop used in the national xc series. Each rider cleared this well and a few demons conquered and put to bed.

To the bomb holes, the sandy bank and through along the Mar road to a quick tweak in the Jump Park. By this time it was hosing it down but we kept at it, sessoning the DH park and covering off our jump/drop technique. Every rider improved through this phase and there were some big smiles all round.

The weather persisted so we blew for home and headed to the shower and some hot Pizza. 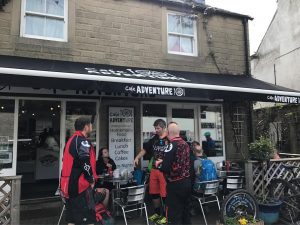 After meeting at the “Adventure Cafe” in Hope (friends of Alliance and active members of Peak District MTB), where we snaffled amazing coffee and Bacon and Sausage Rolls we headed out up the Roman Road towards Hope Cross. The climbs took some of the group by surprise but after some discussion around climbing technique,pacing ourselves and with stunning weather, good banter and fab views we quickly moved up the climbs. Playing up No Dabs climb our Timber! Bells alerted all the other trail user to our presence as we rode round to Potato alley. Riding behind Rachel and Steve, it was a total joy to see their confidence swelling as they picked their lines so well, relaxed into the trail and went for it. Every rider was beaming with happiness and Steve and Rachel in particular stated that they wouldn’t have attempted the descent before the weekend

Climbing up Lockerbrook and then arriving at Screaming mile, we fired down to the Derwent Dams in quick time with whoops and hollers aplenty despite the wet sloppy conditions each rider challenged themselves. 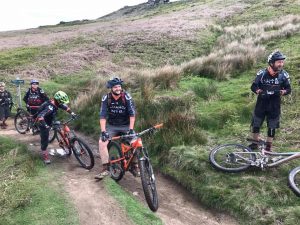 Del’s assistance of fellow riders was a sight to behold as he fixed the chain of some strangers by the trail side, however this biblical kindness bought him no tokens as he unceremoniously buried his front wheel in a rutted puddle and went OTB, sprawling in the water. His first words, quick take a photo.

Descending towards Cutthroat bridge we enjoyed the numerous line choices before speeding to the rocky descent to the pub and crossing back across the dam wall to climb back over to the Roman Road.

Descending with doe real speed, the team were popping off rocks and rain bars with no issues, pumping the trail and really having fun. All finished up with a cool Pint at the pub in Hope and some serious laughs.

A cracking weekend Alliance Family!! you did us all proud.

We're not around right now. But you can send us an email and we'll get back to you, asap.